Machine Wash Cold. Do Not Bleach. Use Only Non-Ionic Detergents and Fabric Softeners. Cool Tumble Dry or Hang. Remove Promptly.

How Do ESD Smocks Work?

8900 Series ESD Jackets shield nearby electronics from static discharges (ESD) emanating from static that is on underlying clothes and skin. The ratio of polyester (the color of the fabric) to carbon (the black thread woven in a grid) in the smock means it is static dissipative: resisting charging when the wearer rubs the smock against itself or other objects. 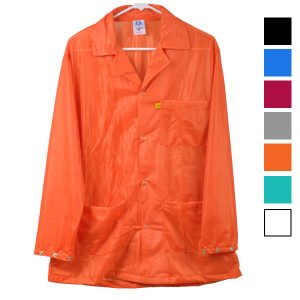 You're viewing: Lightweight Plus ESD Jacket Snap Cuff From: $33.79
Select options
Do NOT follow this link or you will be banned from the site!